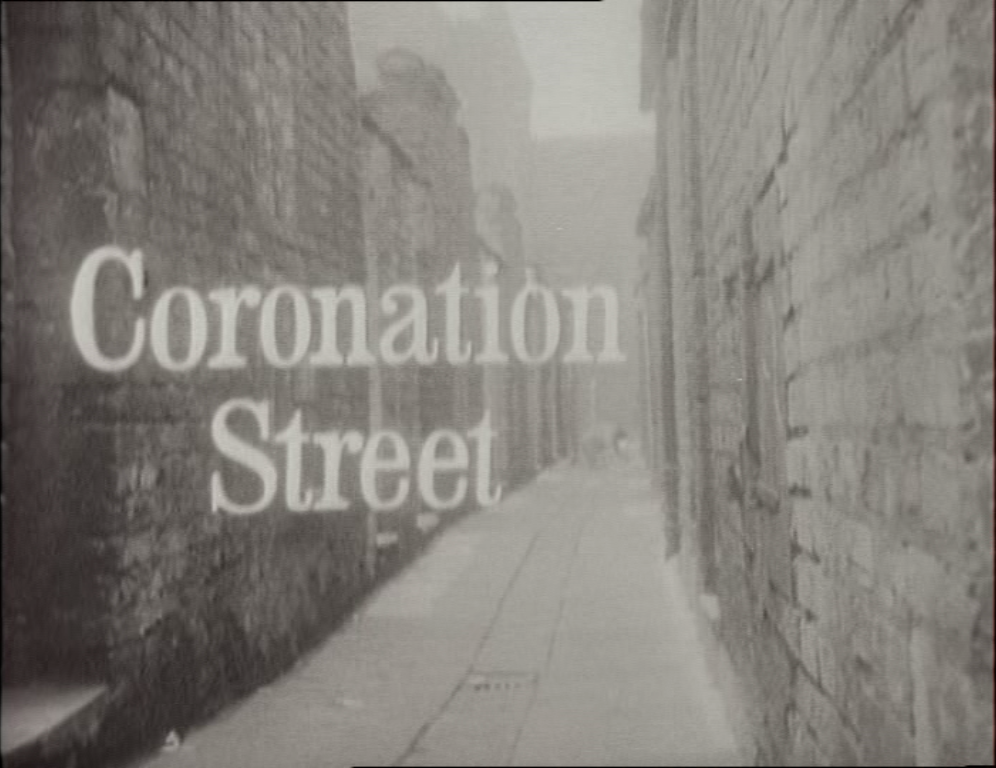 Almost as if they knew about TV Minus 50's return to life, the residents of Coronation Street are putting up the bunting.  All right, technically it's in preparation for a jamboree at the mission hall - and it's Ken Barlow putting it up, with Albert Tatlock supervising grumpily. It's artily shot from a distance by director Michael Beckham, with a rocking horse going like the clappers in the foreground. Lucille Hewitt (who was riding the rocking horse) doesn't think the rodent Len Fairclough's knocked up for the Rat Race is very convincing, but she sheepishly admits that (child of post-war affluence and hygiene that she is) she's never seen a real one. 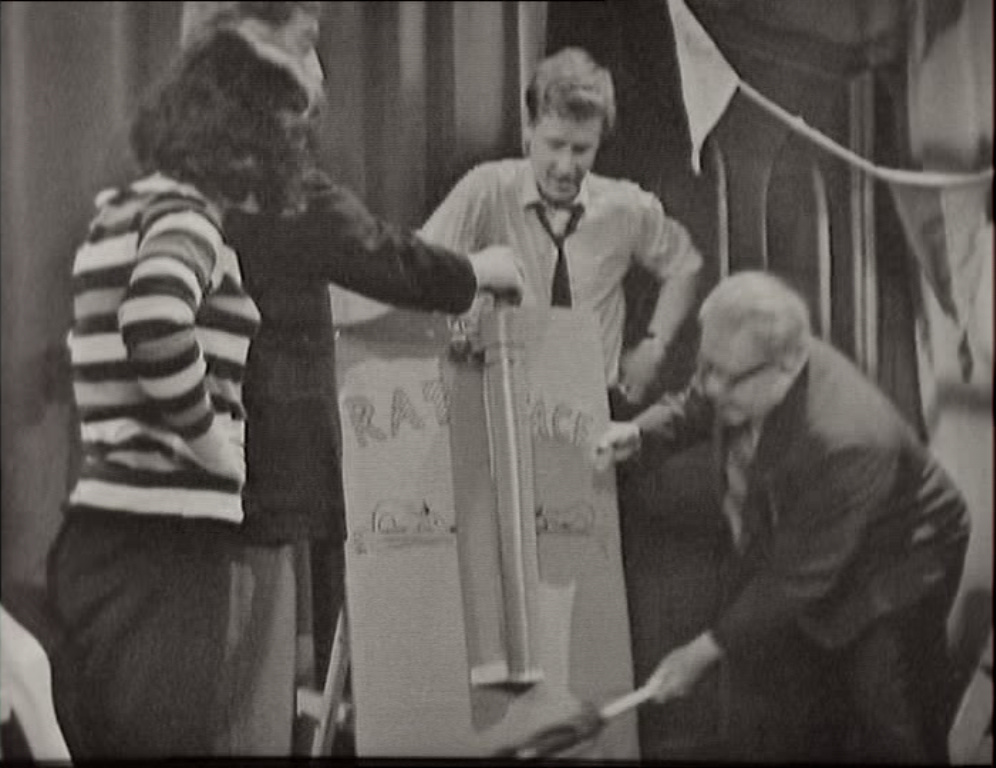 Despite the jollity, we rejoin the show in the aftermath of a massacre.  Or at least, that's how the more salacious end of the press reported it.  Coronation Street's new producer Tim Aspinall was the first in a long line of new brooms that would make the headlines by sweeping away established characters considered surplus to requirements (generally, these are the sort of characters few people take any notice of, but who are swiftly upgraded to old favourites once they're known to be leaving - then just as swiftly forgotten once they're gone).  Frank Barlow and Jerry and Myra Booth have all moved on to pastures new, and Harry and Concepta Hewitt will soon be following in their wake (Lucille, needed for teen interest, stays on with Jack and Annie Walker).  Most famously, Martha Longhurst dropped dead in the Rovers snug while the rest of the cast were having a sing-song.

So the decks are clear for the arrival of new regulars - and that's what this instalment mainly focuses on.  Young Irma Ogden first appeared back in January, and swiftly established herself at the heart of Street life with jobs in both the Rovers and the corner shop.  She's played tremendously by Sandra Gough, who makes her vivacious, but with a sardonic world-weariness beyond her years.  Her slightly jaded outlook can be traced back to her troubled upbringing in a family of, it seems, monumental ghastliness.  In some ways (not least her tower of red hair) Irma's like a young Elsie Tanner - so it's no surprise that the older woman's taken her under her wing, providing a sympathetic ear for her grumbles about her workshy, violent father and well-meaning but fundamentally useless mother.  As well as her parents there's her sister Sylvia, currently in a remand home, and her brother Trevor, who at least has a gift for always landing on his feet. 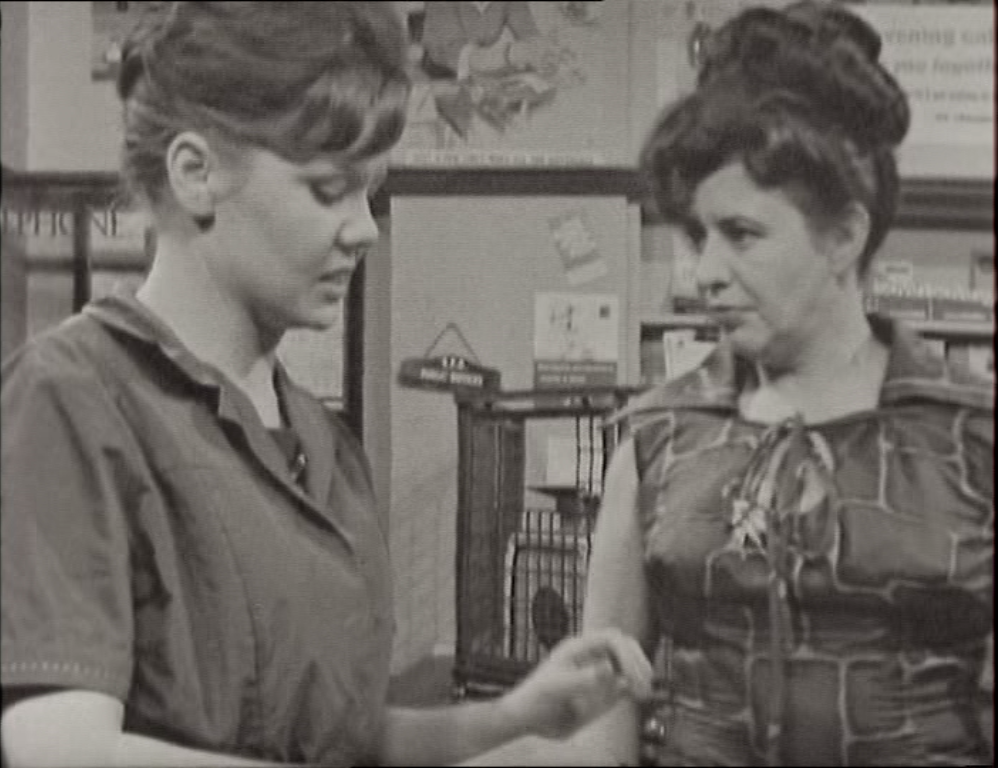 Irma escaped her family many years before, but now they've tracked her down and are hoping to see a lot more of her: they're planning to buy 13 Coronation Street.

Elsie has to dash off, but she's swiftly replaced by another of the show's mainstays.  Ena Sharples might look as solid as the cobbles of the street, but really she's an unpredictable character, dispensing either wisdom or venom as the mood takes her.  Here she's at her most malevolent, taunting Irma over the coming of her undesirable brood (and gloatingly reminding her that Stan Ogden refers to her as "a slapper"), and recapping number 13's unlucky history with ghoulish relish: "There was Christine Hardman's mother May.  She died on the stairs and nobody heard her calling.  Then there was Christine herself, threatened to throw herself off the roof of the raincoat factory.  There was insanity in that family, I always said so.  And then there were the Booths.  They didn't have such a good time there, did they?" (Jerry Booth was driven so deep into debt by his wife Myra's desire for the latest consumer goods that they eventually had to go and live with her parents).  Ena thinks the Ogdens an ideal next chapter in this tale of disaster.  Irma's quick to point out that it's not just her that her family will be causing trouble for.  As she describes them the Ogdens are an unstoppable force of nature: "Look, Mrs Sharples, I'm not very keen but they've come and we're all going to have to put up with them.  That includes you and all, Mrs Sharples!" 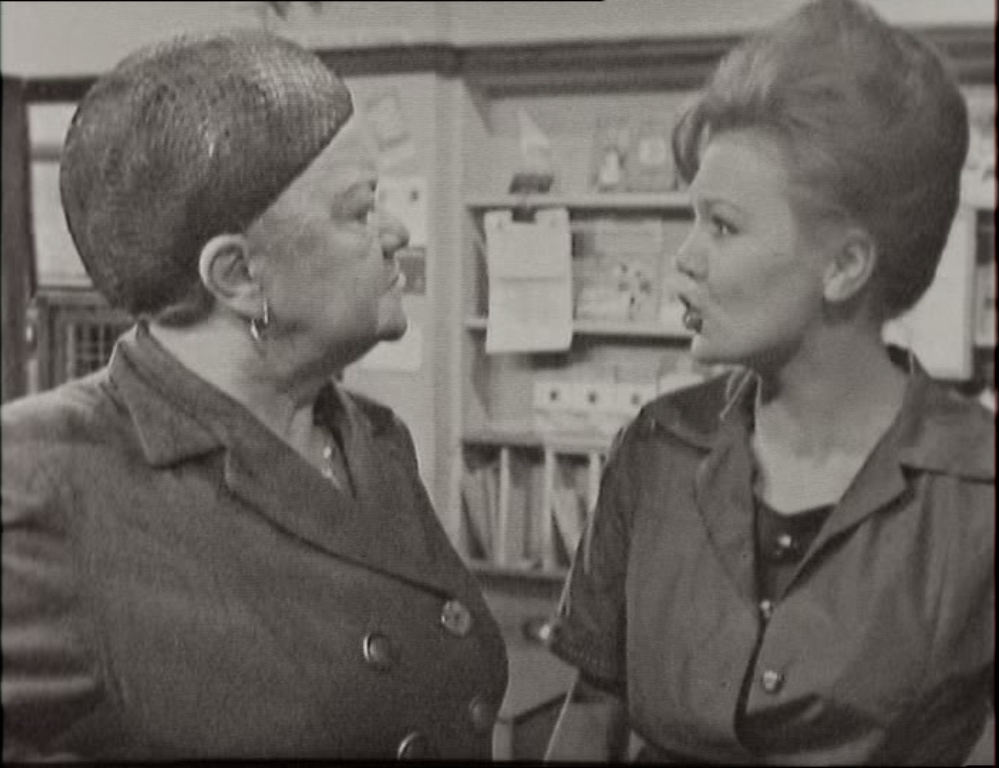 Bernard Youens had made his debut as crumbled man-mountain Stan Ogden in the previous episode; it's here we see Stan's goblin-like wife Hilda (Jean Alexander) for the first time, peering over the kitchen sink at number 13 in wonderment at the sight of two taps.  Coronation Street's chiselling  landlord Alfred Wormold makes a rare appearance - incarnated by lugubrious Ivor Dean, regular sparring partner of The Saint - as he tries to get the Ogdens to pay over the odds for the property. 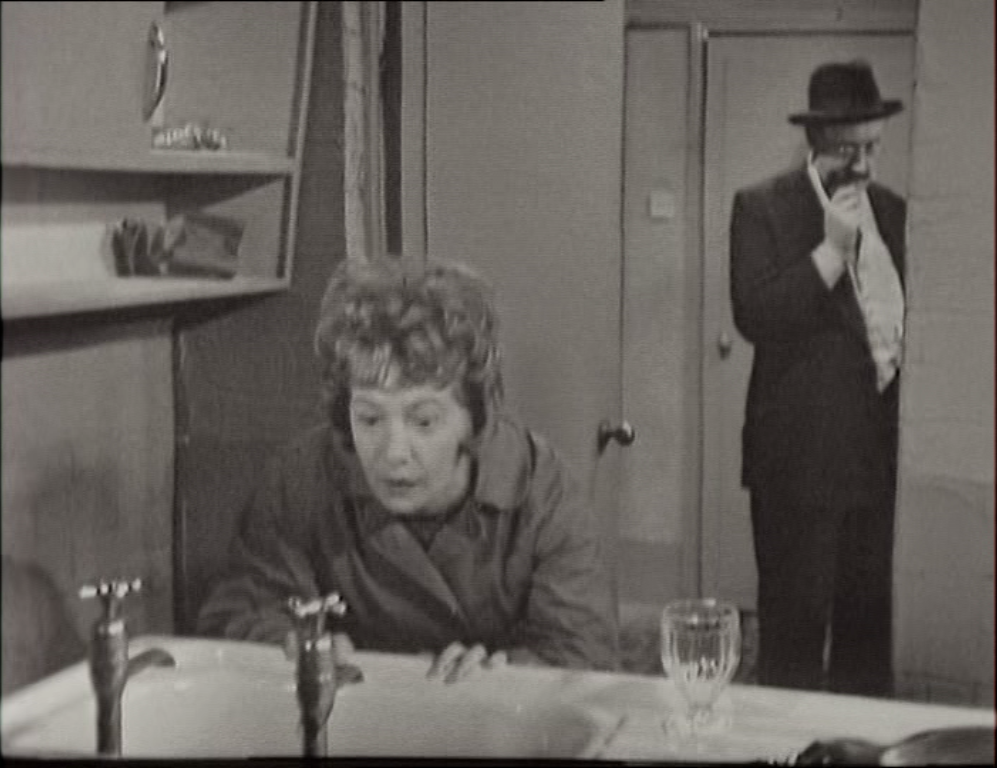 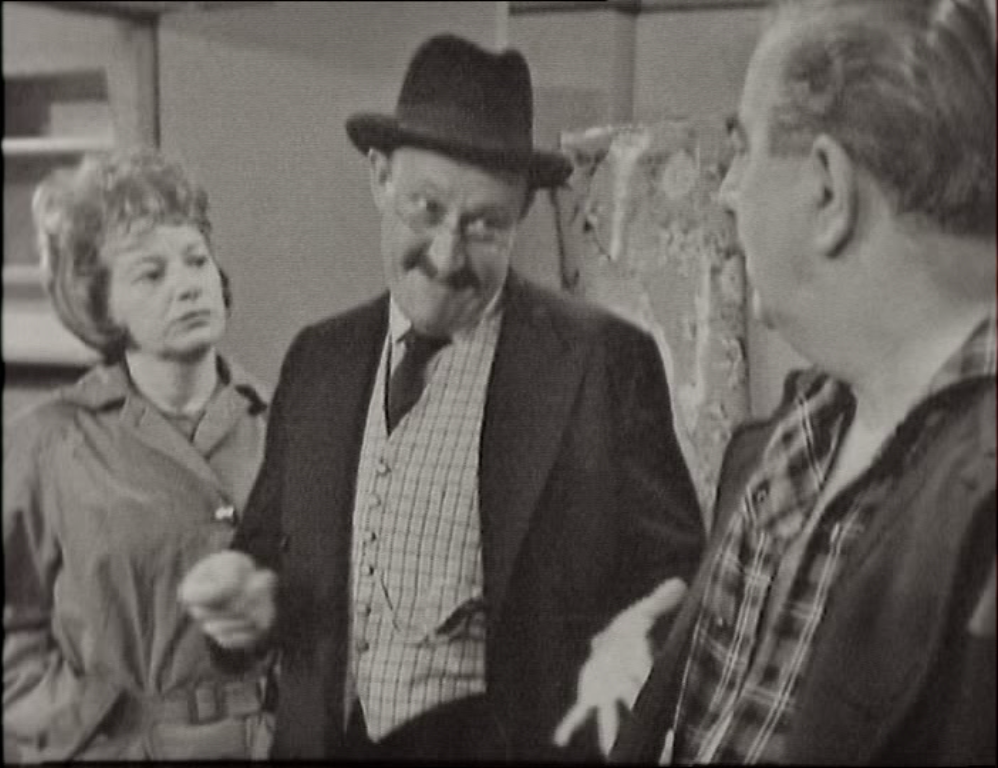 The Ogdens are the template for a new kind of soap opera family, one that represents the less respectable face of the working class (Coronation Street alone would later give us the Duckworths, the Battersbys and the Windasses, all from this mould).  Stan ("Spider" is the baffling nickname given to him by Hilda) in particular, with his lack of interest in work, his inability to remember his children's names, and Hilda's fear that he'll leave her again as he has several times in the past, is the classic tabloid image of the undeserving poor to the life (from a 2014 point of view all that's missing is any reference to benefits and the implication that he's not the father of all the Ogden children).  "I must admit it's been very well cared for," Hilda says of number 13, just as Stan grounds a fag out on the floor.  And yet, largely thanks to the actors, there's an immediate warmth and likeability to the characters that points to the way they would develop. 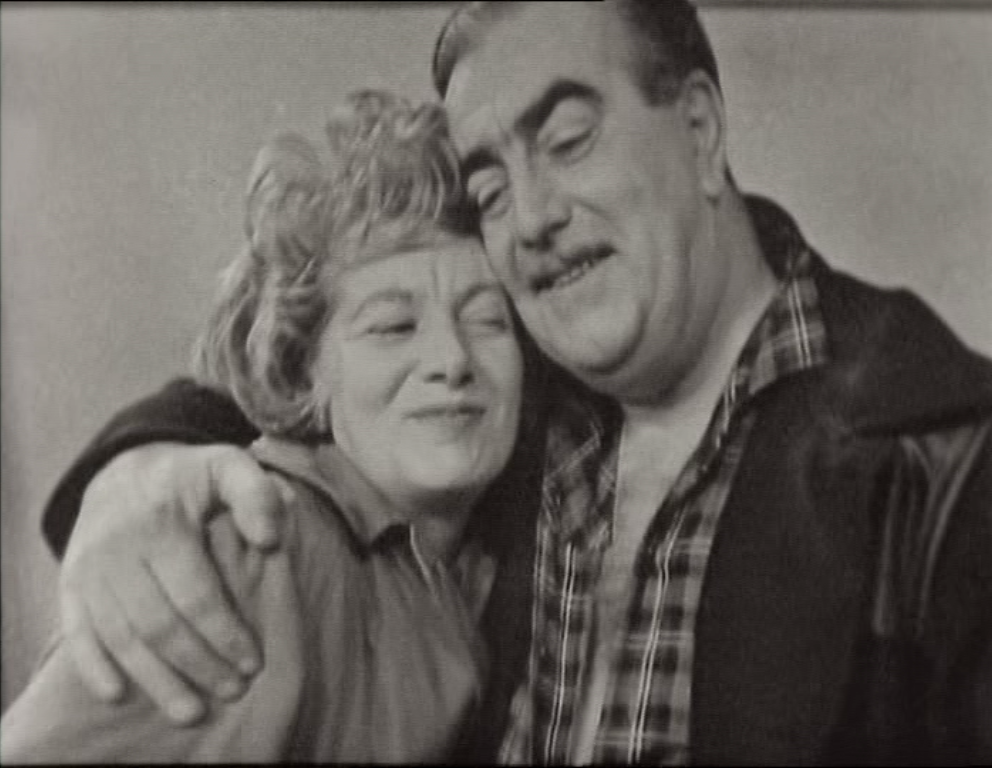 Wormold wants £700 for the house, but the Ogdens offer him £550.  If these prices of the past seem astonishing today, it's even more incredible that when Wormold pops over to the Rovers and chats to Len Fairclough about it, the builder estimates that the house is worth half what the Ogdens are offering.  Mind-boggling stuff.  Wormold claims not to be concerned about whether Stan and Hilda take the house or not: "Council'll buy it anyway, when slum clearance gets this far" - 50 years on, his certainty that this row of terraced houses' days are numbered raises an automatic smirk. 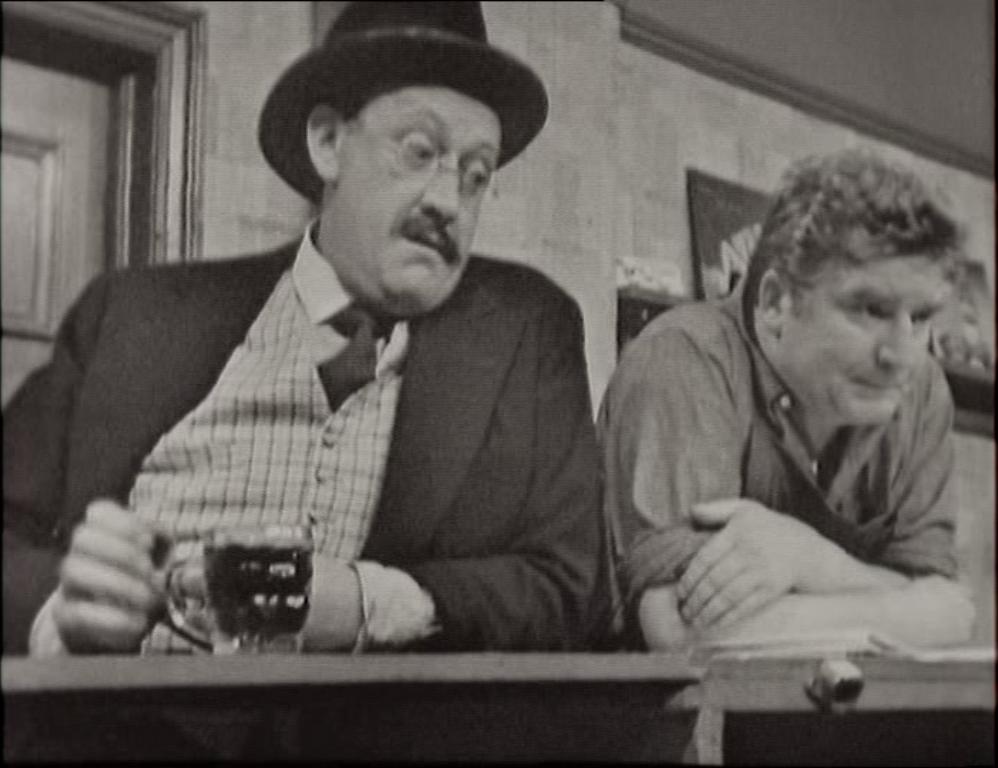 Irma's wearily acquiesced to moving in to her parents' new home, but devastates her mother by pointing out that, for reasons of space, the front room will probably have to be used as a bedroom.  For Hilda, this grotty terraced house represents upward mobility: "I've never had a front room.  I was looking forward to having a front room." 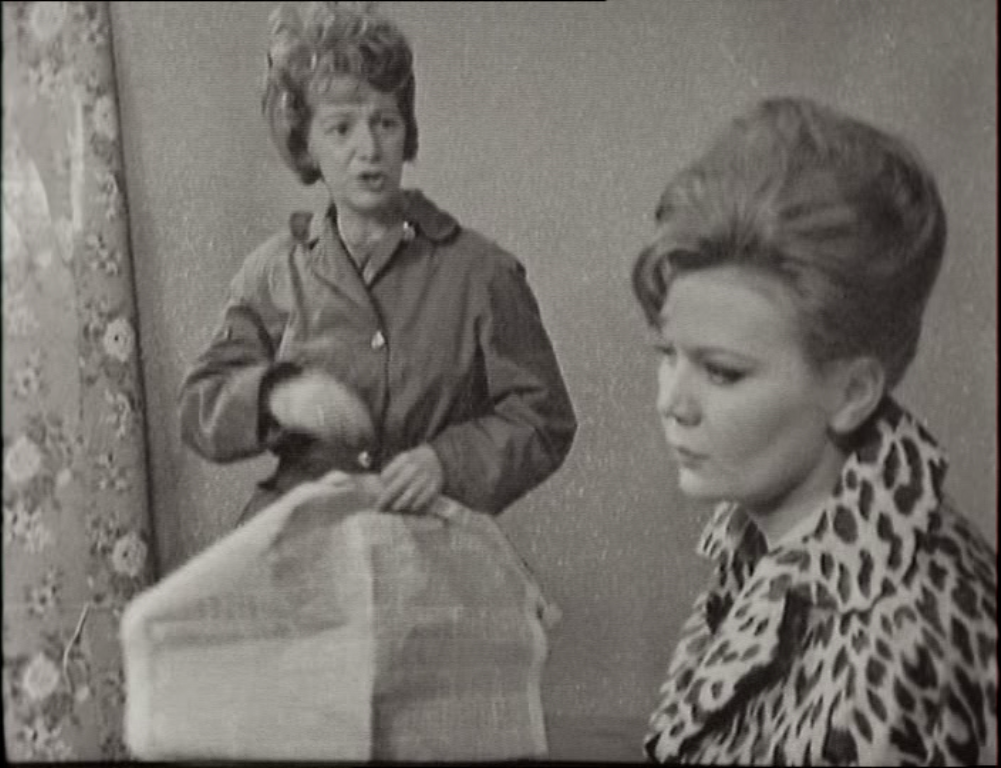 Eventually, a price of £575 is agreed upon.  Irma's objections to Wormold's celebratory pawing of her are met with dismay from her mother: "Eh! He bought your father a drink!" 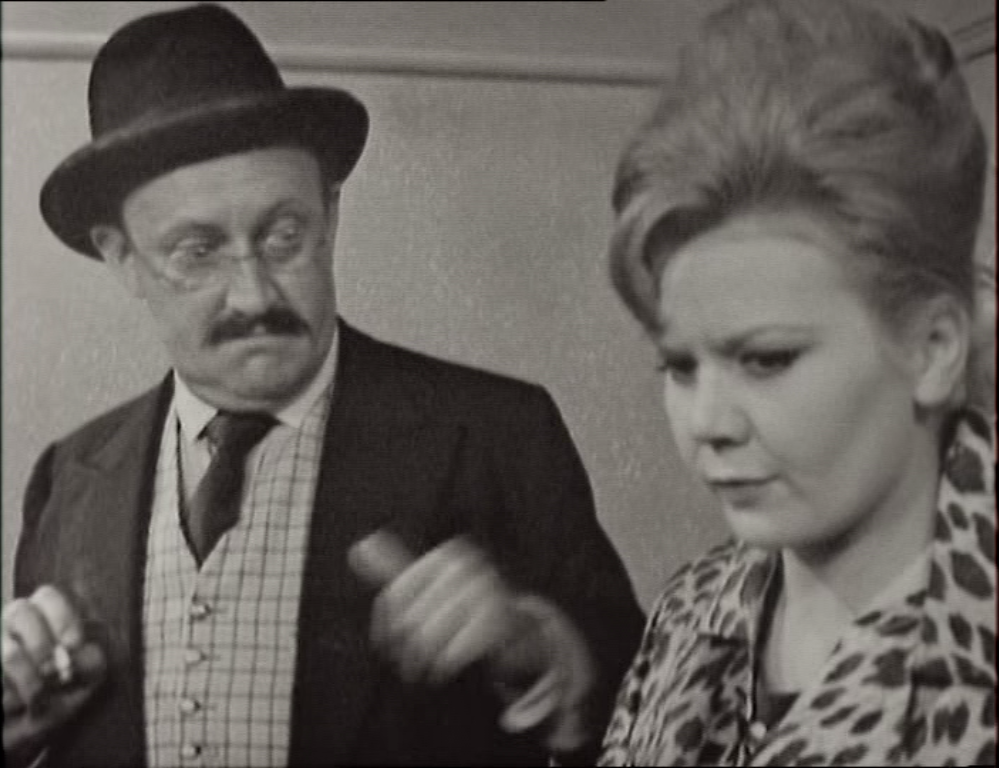 But, TV milestone that the arrival of the Ogdens is, it's not the only thing going on in this episode.  In fact, by this point Coronation Street seems to be squeezing an increasing number of storylines, big and small, into each episode.  As well as the event at the mission hall we have Annie Walker's gammy hand: unable to wash up glasses she's reduced to balefully supervising an increasingly flustered Jack's unsatisfactory attempts: "Glasses are made of glass, love.  That's how they get the name." 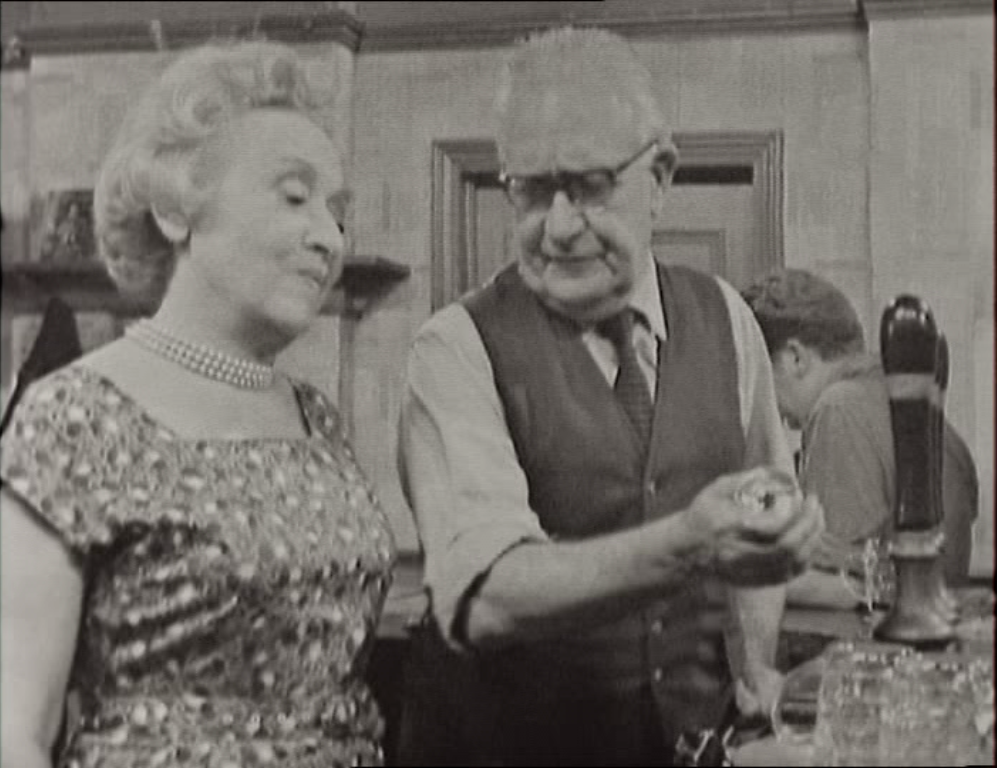 Then there's the worker's wage packet Lucille found in a box of goods from Ireland when she was helping out in Florrie Lindley's shop.  Will there be a reward? 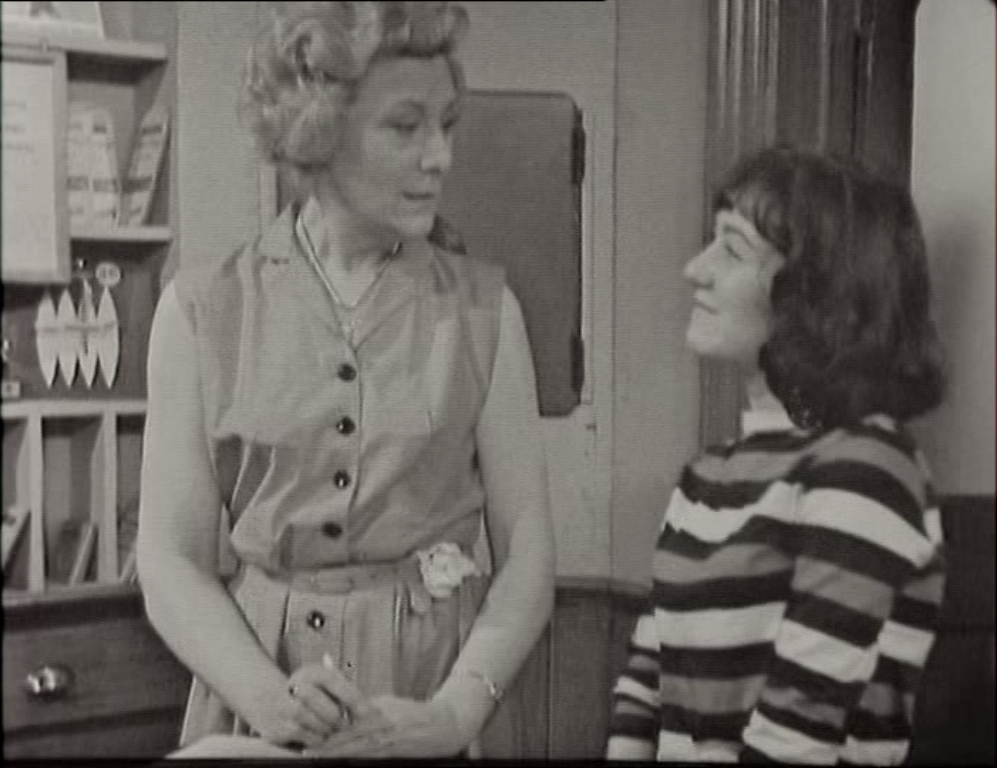 ...and there's Albert's attempts to talk Ken into writing him into a book.  He's long harboured a rather strange ambition to be immortalised in a work of fiction: "Something like the old man in Little Nell, but with a bit more gumption."  Ken reveals that he has in fact just started work on a play for television. 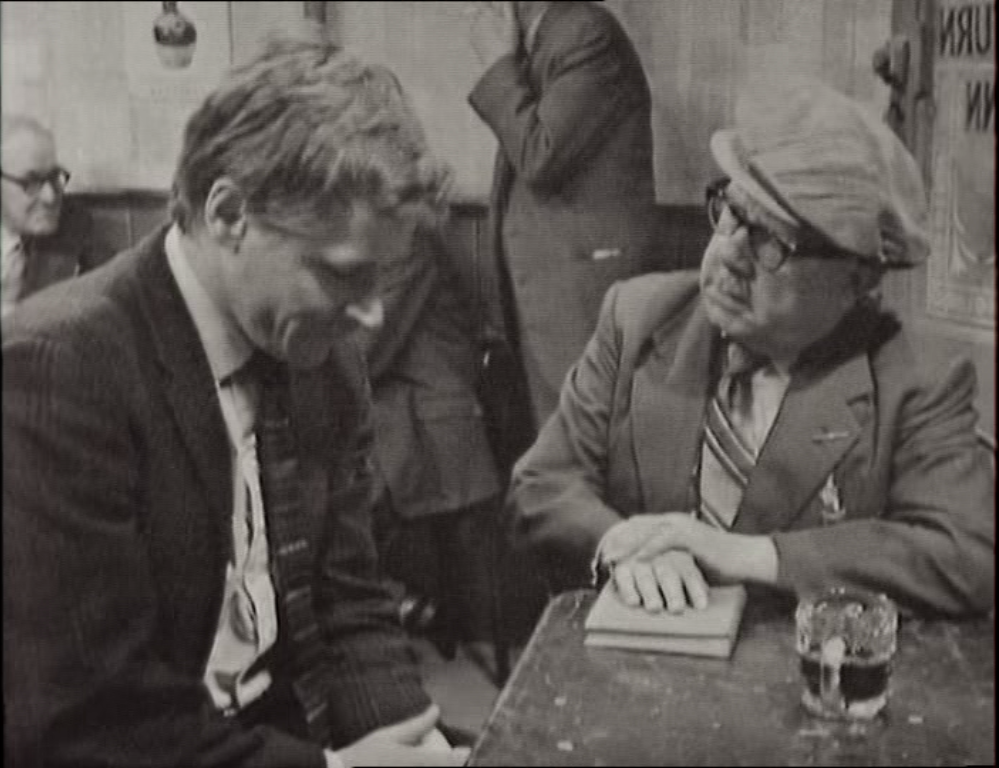 Last, but very definitely not least, are the preparations for Miss Nugent and Mr Swindley's upcoming nuptials.  Swindley is very obviously having second thoughts, and seizes on Mr Papagopoulos's fears that his relationship with his subordinate could damage productivity at Gamma Garments as a reason that they shouldn't get carried away with their emotions.  Poor Miss Nugent is crestfallen. 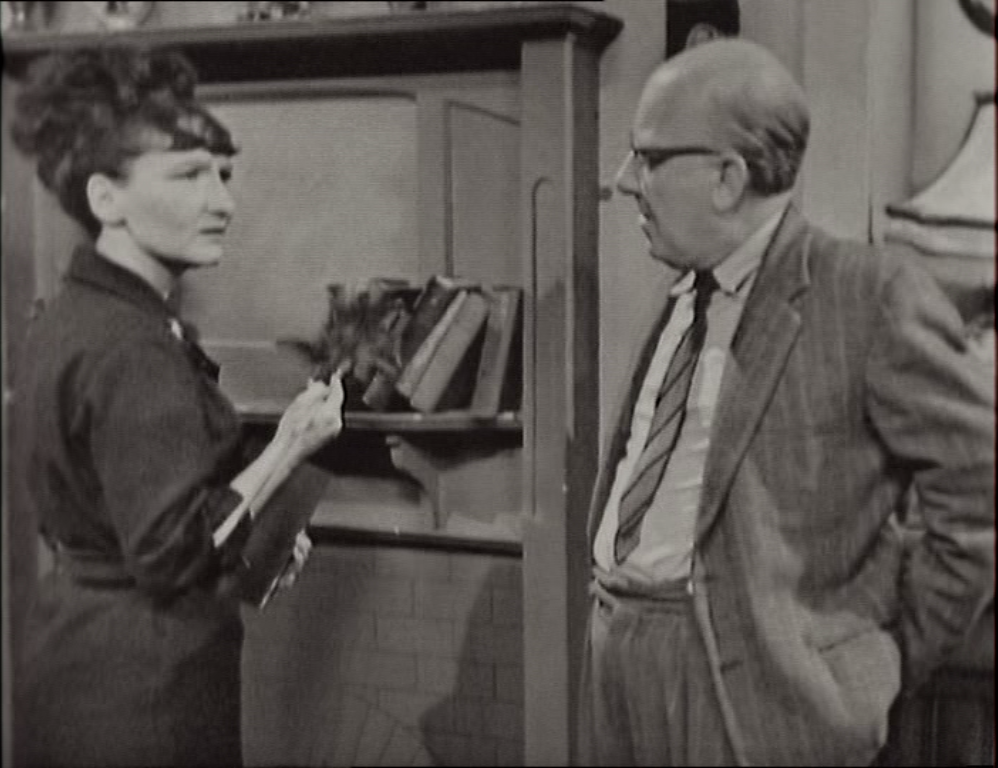 Due to a general lack of friends, Swindley's chosen the highly unlikely figure of Len Fairclough for his best man.  When he finds Len in an apparently compromising position with his bride-to-be during a suit fitting, Swindley's reaction is closer to relief than jealousy. 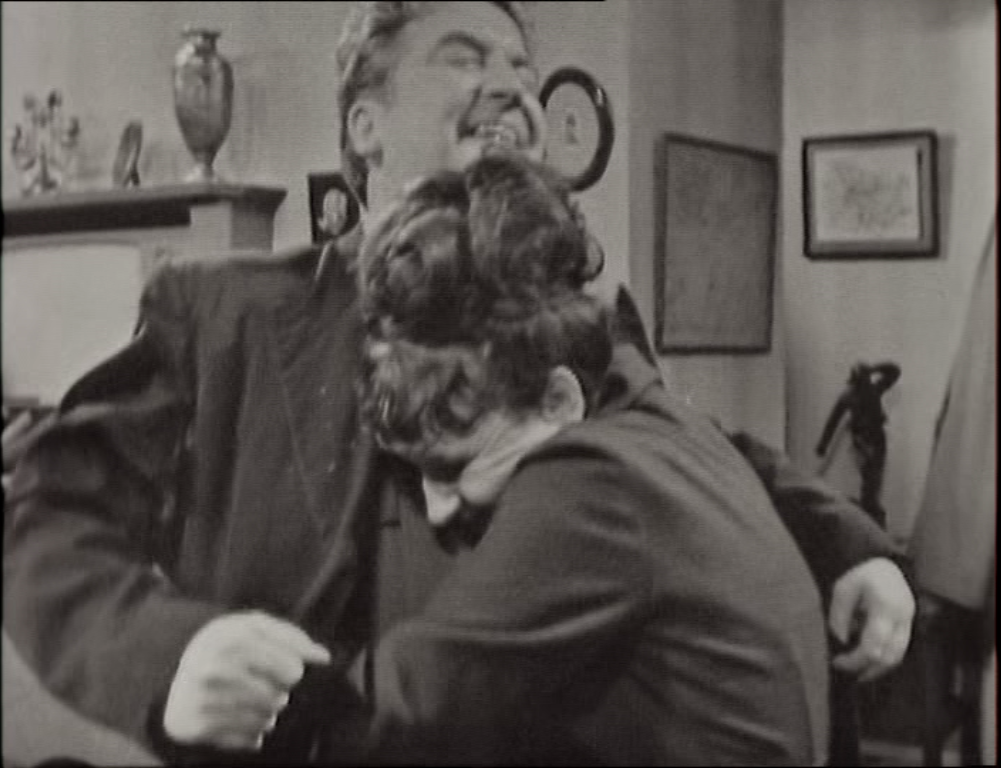 The episode ends with Stan and Hilda popping over to the Rovers, where their new neighbours are quick to offer them a welcome drink, and Hilda embarrasses Irma by revealing to all and sundry that her name is, in fact, Freda. 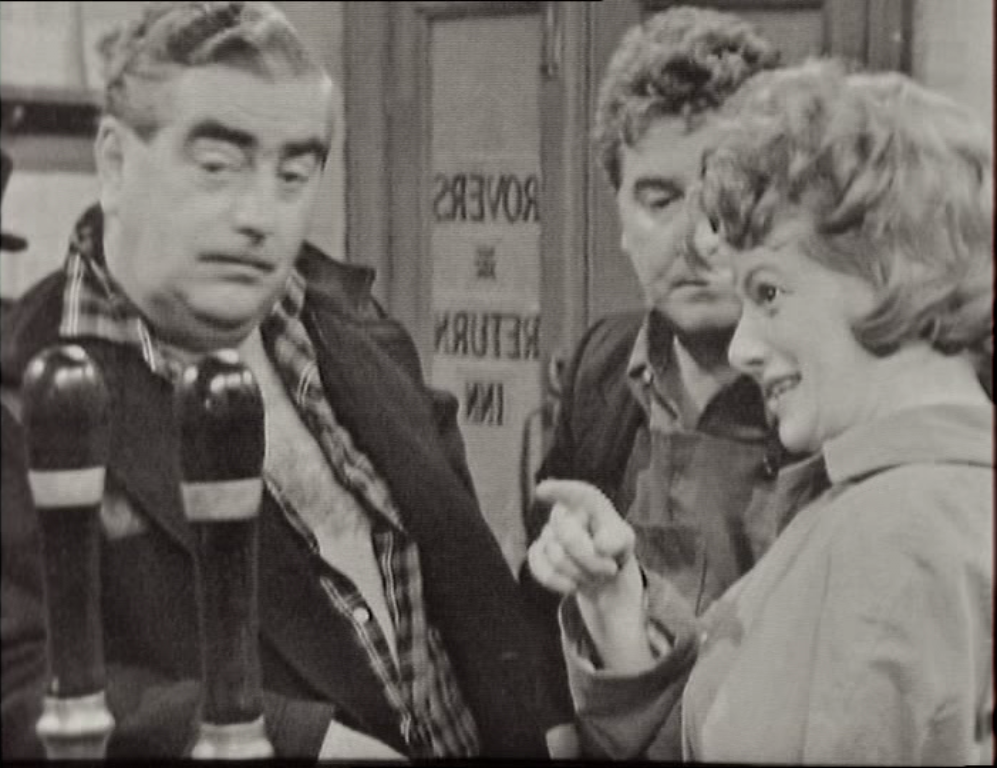 Elsie (who's got another new job, but won't tell Len what it is), tells Irma she thinks the Ogdens will fit in to the Street just fine, but the barmaid issues a terrible warning: there are more Ogdens to come, "And believe me, when they get going, this street will be like Margate on a bank holiday" (that's a topical reference to the mods and rockers skirmishes that hit the headlines throughout the spring and summer of 1964, history fans). 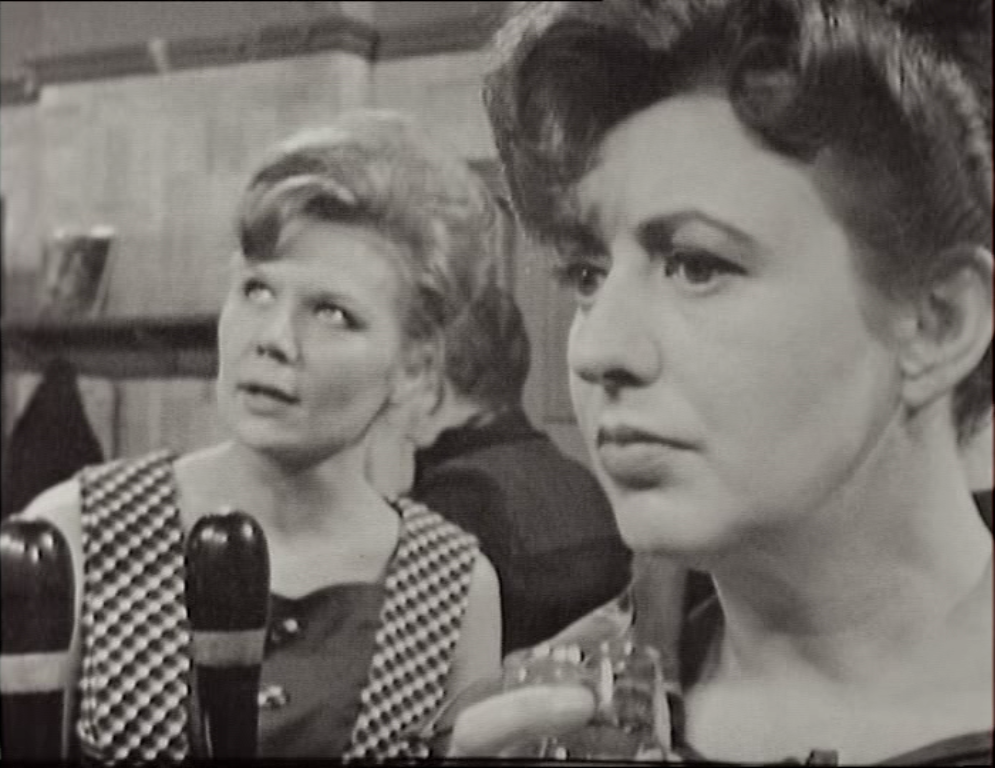 That's not quite how it turned out, though.  The show's writers changed their minds and the threatened Ogden onslaught never happened: Trevor lived at number 13 briefly before being written out, while Sylvia and another Ogden child, Tony, never turned up and in later years were written out of the show's history altogether.  Stan and Hilda, meanwhile, would become increasingly cuddly, characterised as unlucky rather than undesirable.

And if you'd rather watch the episode than read what I have to say about it, you can do so here: