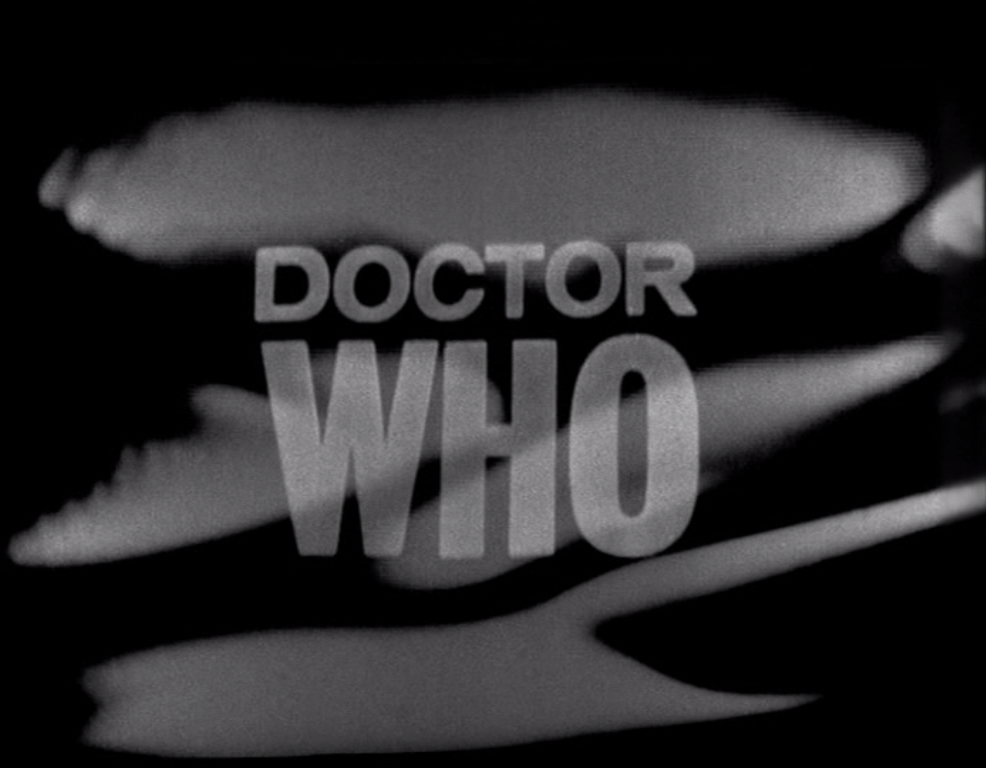 As with the last instalment, this week's episode of Doctor Who no longer exists in the archive, but, due to the efforts of the obsessive fans who the show's attracted since the beginning, we can still hear what it sounded like.  Ian has been lured into the duplicitous Leon's trap and is left dangling from the ceiling, jeered at by an uncouth guard (Terry Bale), while Barbara and the Doctor have been reunited at Conciergerie prison.  He's still just about managing to convince the jailer that he's a VIP, and hits on a scheme for Barbara's escape: "You know my plans always work perfectly".  Barbara's facial expression on being told this is an especially sad loss, but in this case everything does indeed work out: the Doctor convinces the jailer to let her go on the pretext of following her to the lair of her counter-revolutionary associates, then claims a misunderstanding over which of them was actually meant to do the following ("I'm hardly dressed in the proper clothes to go sneaking after someone, am I?").  Unfortunately the jailer decides that releasing Susan too is more than his job's worth.

Ian's rescued from Leon and his men by Jules, who shoots Leon dead in the melée.  Lemaitre's having another audience with Robespierre, who's gloomy as ever and spouting some memorably overdone dialogue: "Tomorrow, the 27th of July 1794, will be a date for history!" By then, Ian and Barbara have reunited at Jules' house.  Ian tells Barbara about Leon's treachery and death, and there follows a fantastic scene with Barbara (badly stung after her attempt at intervening with the Aztecs), refusing to condemn Leon and insisting that the time travellers should take an objective view of what, to them, is history.  The more pragmatic Ian counters that circumstances have left them with no choice other than taking the side of the men who rescued them.  "You check your history books, Ian, before you decide what people deserve," Barbara angrily tells him.   What doesn't occur to Barbara, of course, is that everywhere they travel in time and space is someone's history - an issue the programme's always (of necessity) skirted around.  Still, it's an eloquent framing of the ethical problems of time travel that provides a thought-provoking moral as the show's first series prepares to wrap up.  The fact that history's not a matter of black and white is underlined by Jules' revelation that he's not an aristocrat, or even pro-aristocrat: he just can't bear the anarchy that the Terror represents.  And Barbara's lament, "I'm so sick and tired of death, Ian.  We never seem to be able to get away from it," would be taken up as a major strand of the Doctor's adventures when the series returned in the 21st century.

Anyway, this penultimate episode wraps up with the Doctor approaching Lemaitre about Susan's release, only to discover that the prison chief's known all along he was an imposter - but one he was hoping would prove useful.  It seems he was right, as in exchange for releasing his granddaughter he gets the Doctor to lead him to Jules' hideout...

And now, for one week only, Sergeant Cork (much against his will) swaps familiar Victorian England for the sweltering heat and simmering passions of colonial Lagos. 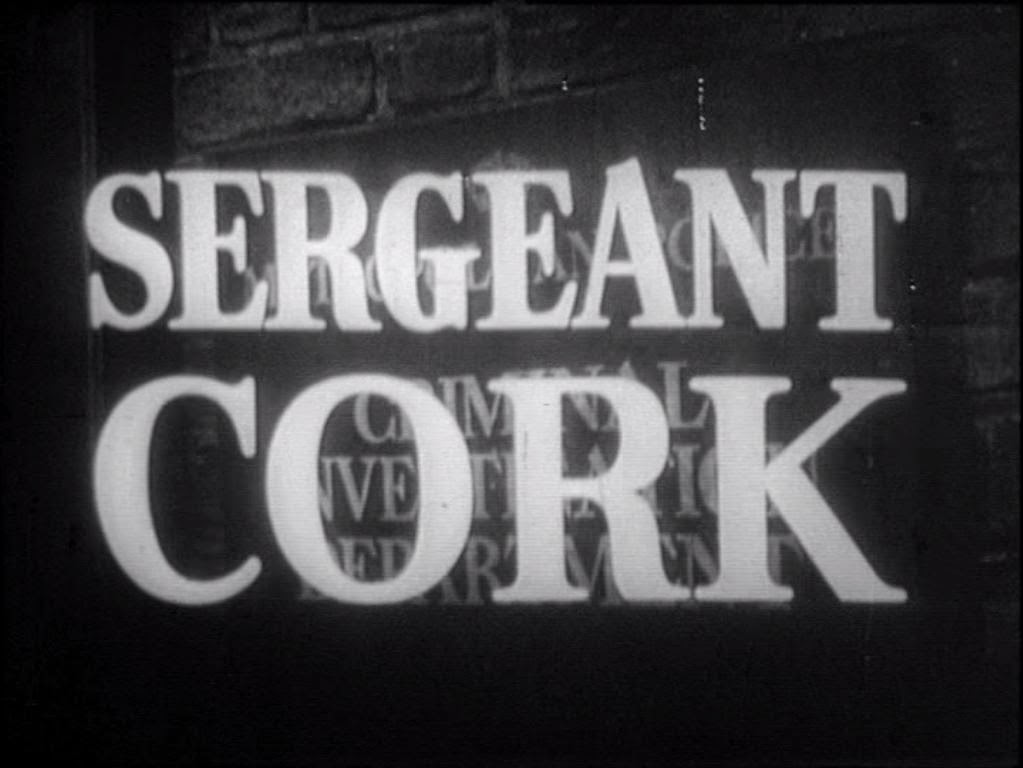 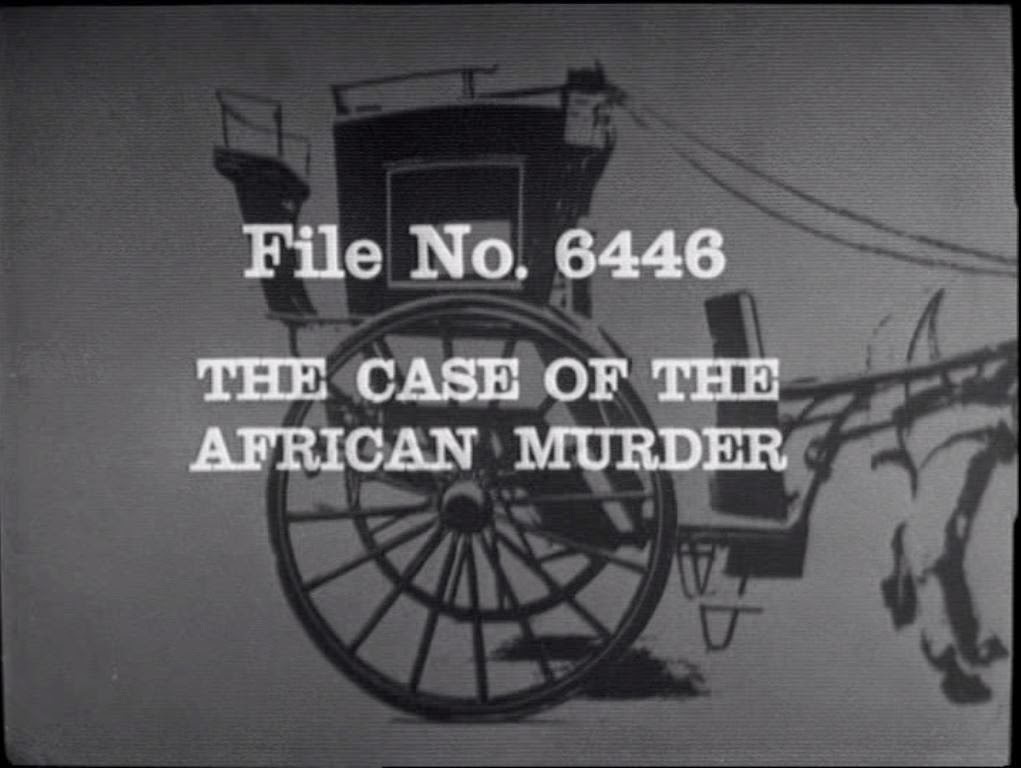 Richard Brinton (Michael Hawkins) is one of Britain's bold empire builders, mining the resources of Africa to enrich the motherland.  His sense of purpose isn't shared by his wife Margot (Mary Kenton), failing fast in the oppressive climate: "It's as though the land itself resents us being here," she sighs as she's examined by Dr Williams (Aubrey Richards), "the only man on the Niger who doesn't drink" - but only because he's waiting until he can get back to Swansea for a pint of proper ale. 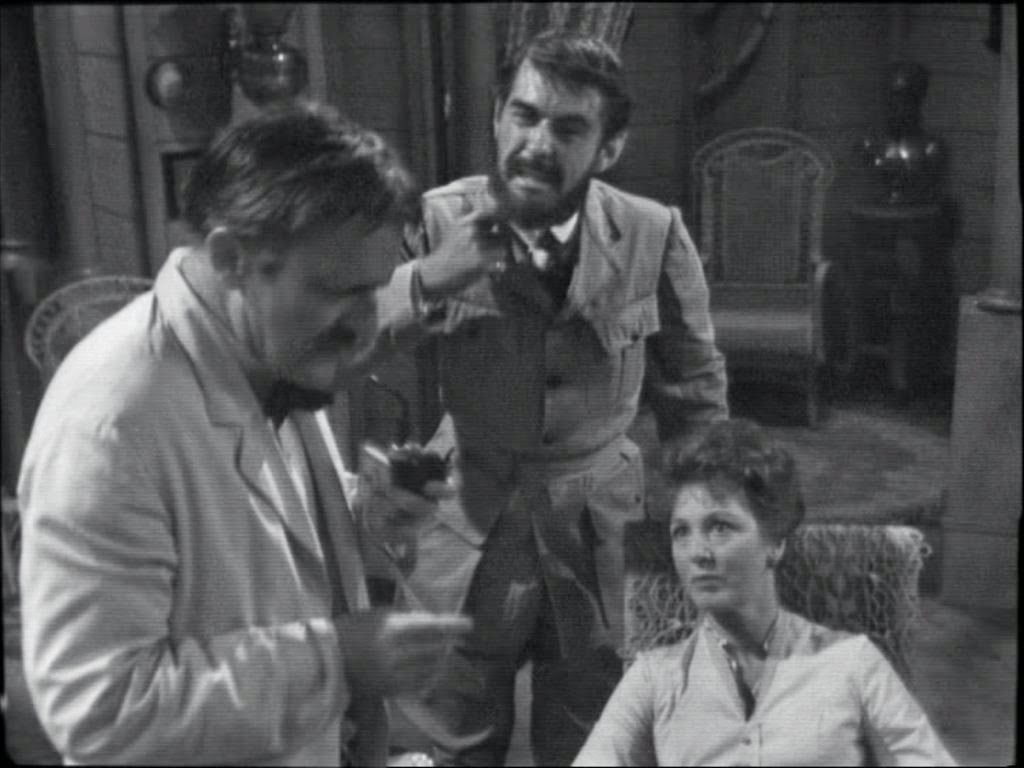 News comes from the police force - headed by consummate upper-class twit Captain Fraser (Paul Gillard) - that French businessman Monsieur Rolland has been murdered.  Initially, of course, the natives are suspected - but the fact that Rolland's been shot makes a white man (or woman) the more likely culprit. 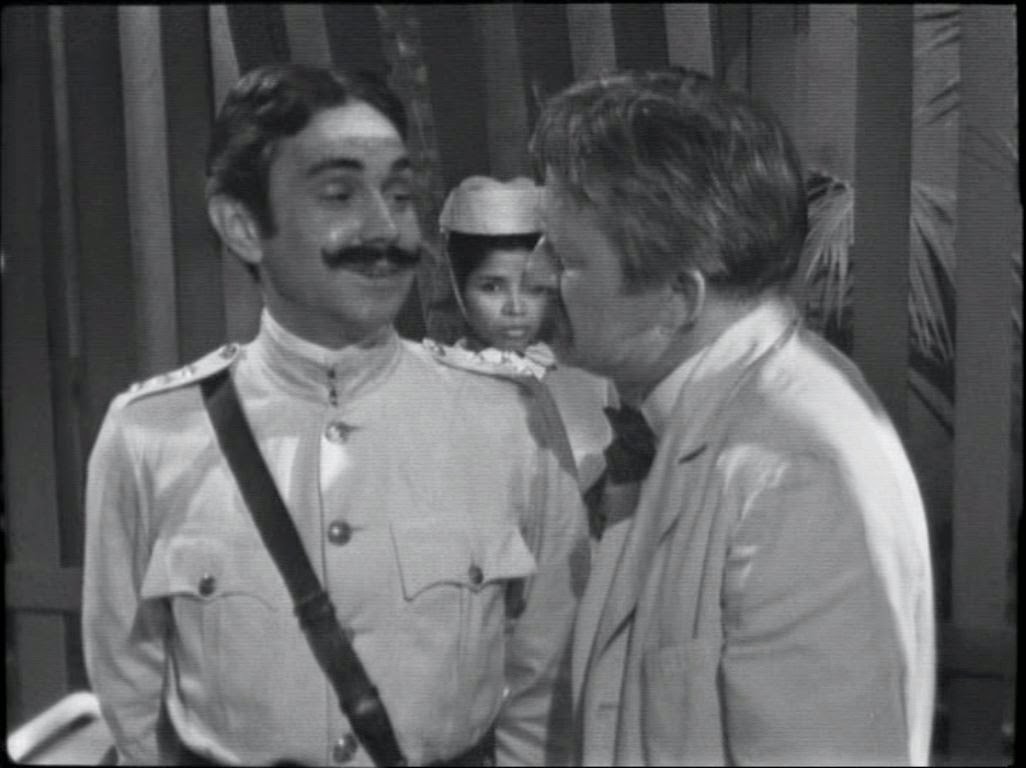 Brinton is a (comparatively) considerate colonist, unlike his neighbour George Somers (Royston Tickner), who despises the natives he considers little more than animals, and thinks they should be soundly beaten for crimes such as spilling a drink on him.  He thinks it's obvious that a couple of the brutes killed Rolland, and is incensed by the news that Scotland Yard have been called in. 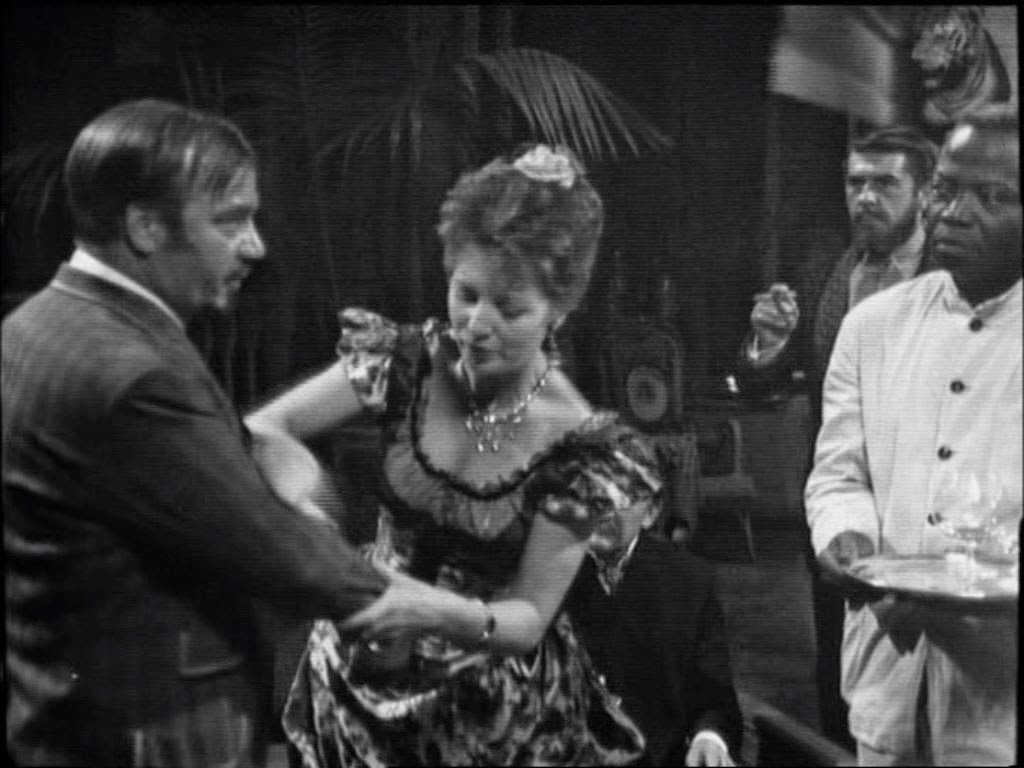 The representatives of the Yard, of course, are Sergeant Cork and Detective Marriott.  They've been called in because Rolland was a spy for the French government, and his murder could spark an international incident.  Cork's deeply unhappy at being uprooted from his London habitat, and looks very uncomfortable in his safari suit (Marriott, in comparison, looks rather dashing in his).  Of course, by the time the pair arrive the case is already several weeks old, though Captain Fraser (who turns out to be an old school chum of "Marigold" Marriott) is no closer to solving it. 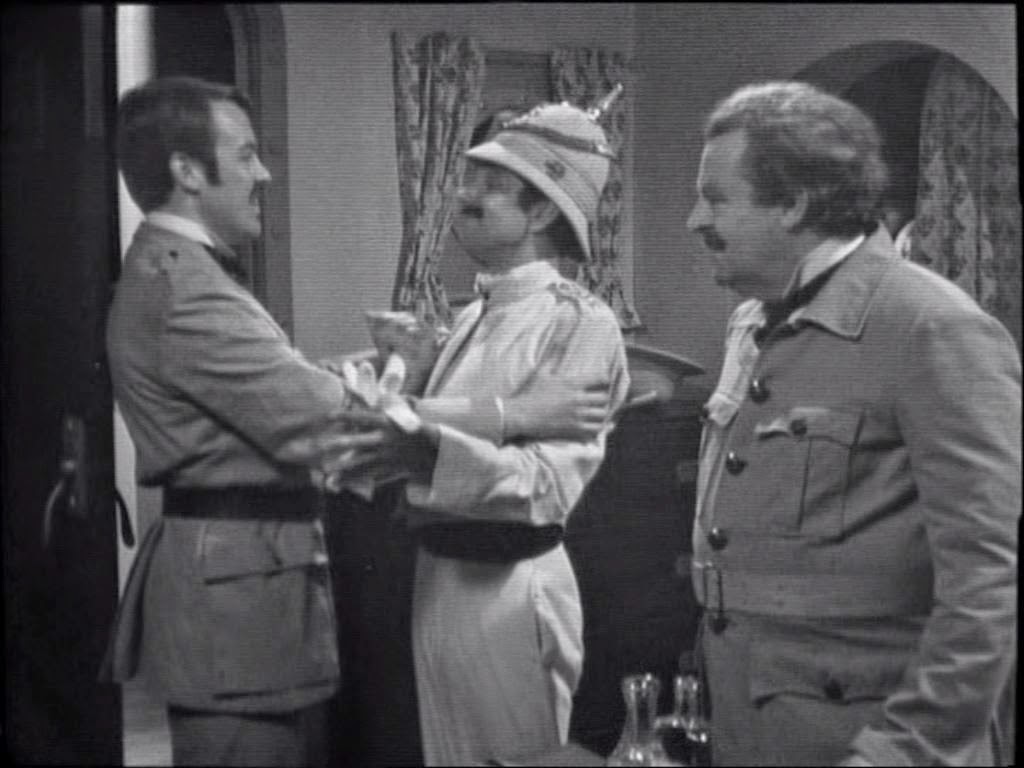 Cork and Marriott have only been in Lagos five minutes when they're approached by Dr Williams' nurse, Angellee (Heather Emmanuel), who claims she has important information for them regarding the murder.  Marriott, instantly smitten, arranges to meet her later. 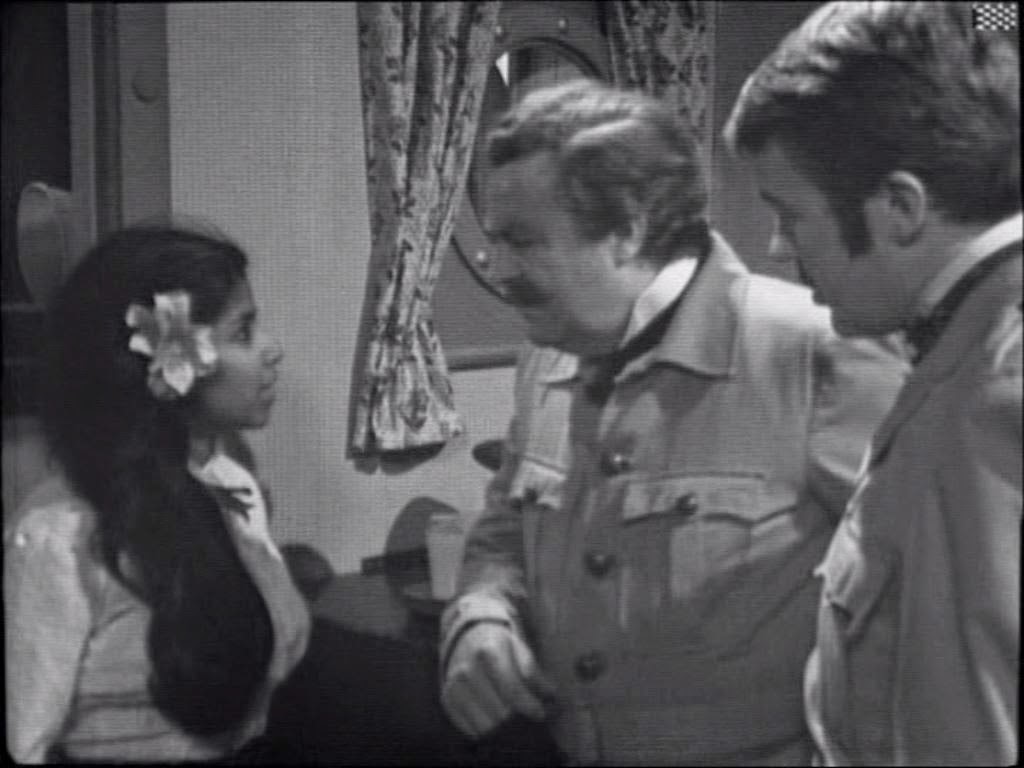 Cork and Marriott are staying with the Brintons for the duration of their visit.  Mrs Brinton seems perhaps over-keen to distance herself from the dead man, but her husband is happy to tell the Sergeant his opinion of Rolland, who he despised for his brutal attitude toward his native servants.  Brinton proves to be rather different to the usual run of colonists, out to make their fortune: "It seems to me that many men who come here see Africa as a great golden goose.  Their only object is to cheat and lie their way to fortune, then they go home and enjoy it... I believe we should only take from Africa what we've honestly earned... The people are savages, yes, but they have a morality and a courage that often makes me ashamed of my own race... I see the future as a partnership: Africans and Europeans together".  Brinton's speech, written by Cork creator Ted Willis, a newly created Labour peer, is clearly intended to have special resonance in the increasingly post-colonial Britain to which they were broadcast, and in fact seems to be the whole point of the episode.  Cork, a 1960s liberal superimposed on the Victorian era, is naturally sympathetic to Brinton's views.  And yet, Brinton's singular strong-mindedness leads Cork and Marriott to suspect that he's exactly the sort of person who could carry out a murder. 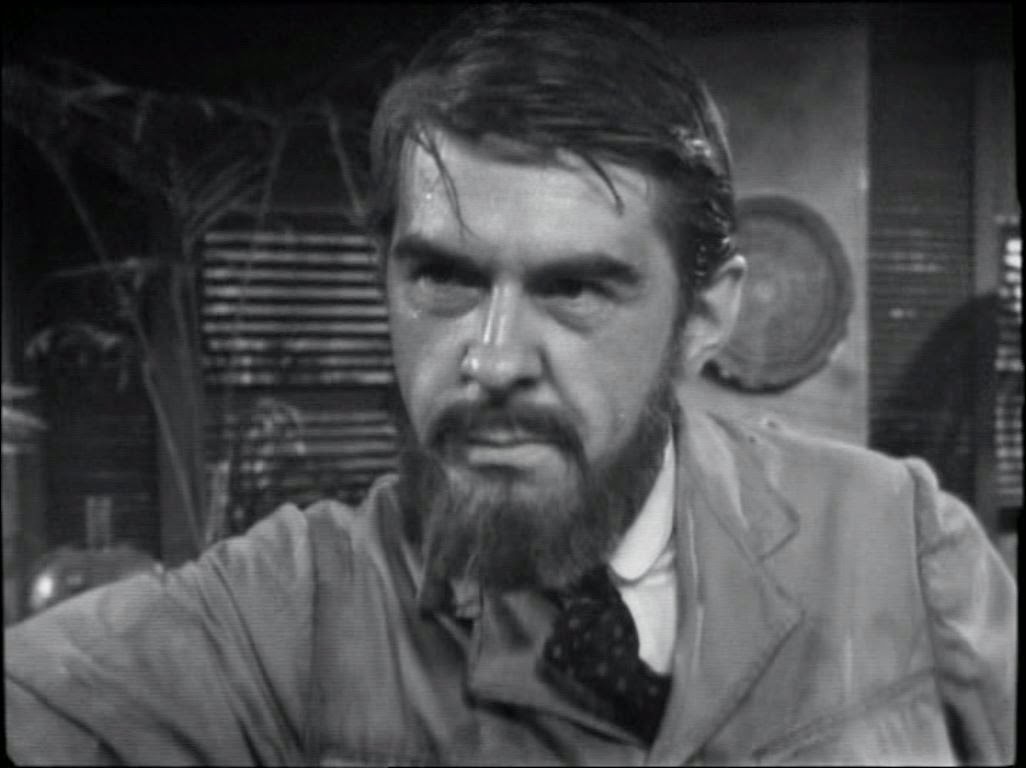 It emerges that the Brintons were at a party given by Rolland, and stayed until the end, on the night of his death.  Williams reveals to Marriott that Rolland was an incorrigible womaniser, and that half the European husbands in Lagos would cheerfully have killed him: "He made me feel quite jealous."  But Angellee was Rolland's long-term mistress, and Williams believes she was deeply in love with him. 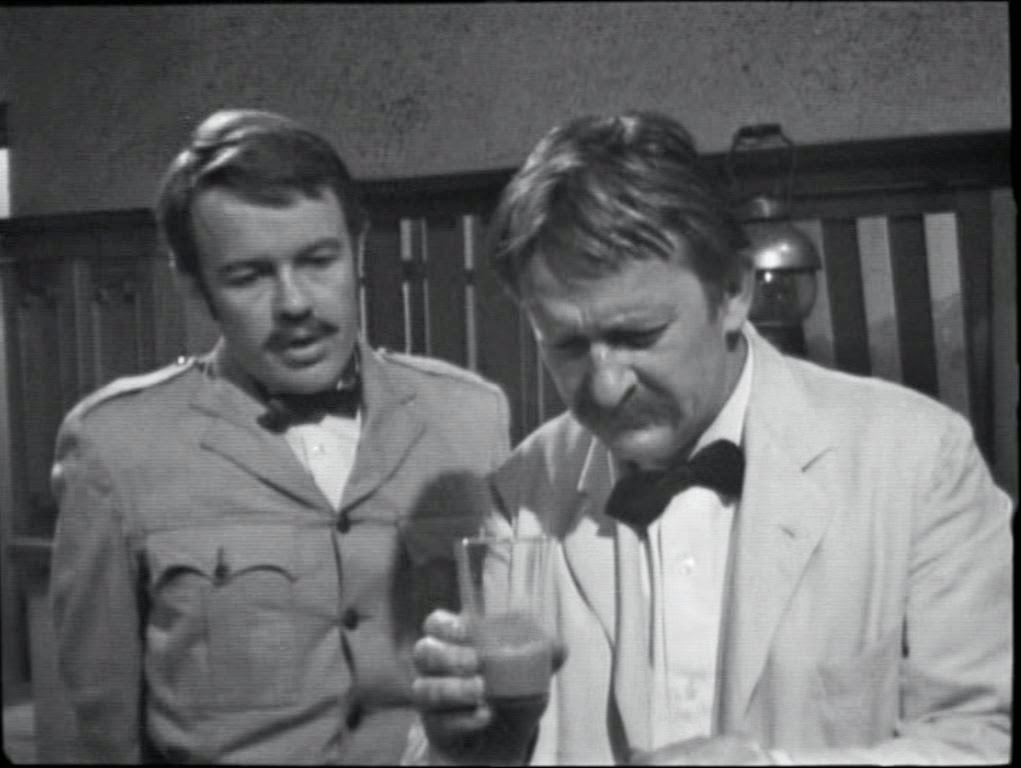 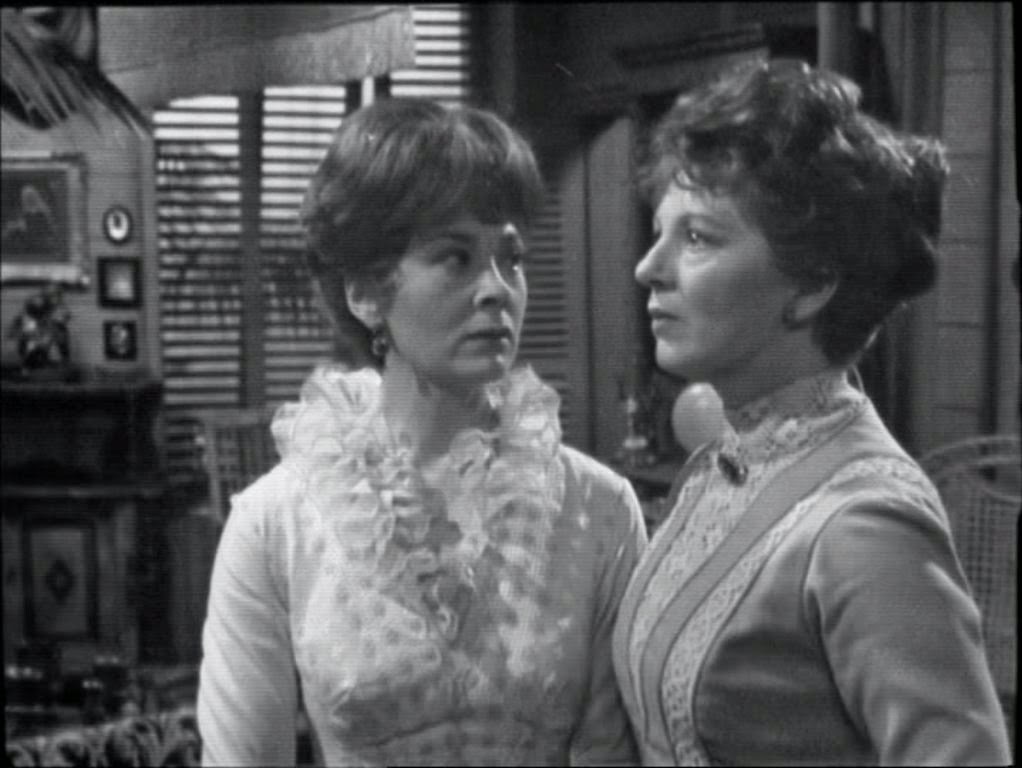 But the interview's interrupted by Captain Fraser, whose sergeant (Edward Dentith) believes he has evidence that Rolland's native houseboys (Sam Mansaray and Tommy Ansah) did the man in.  Cork wants to hear the men's side of the story, but before they can tell it we go to a break - and when the show returns, the story's already been told.  It's striking that, despite the episode's explicit rejection of racism and the worst excesses of colonialism, it literally denies a voice to its black characters (Angellee, the only black character with a speaking part, is half-European). 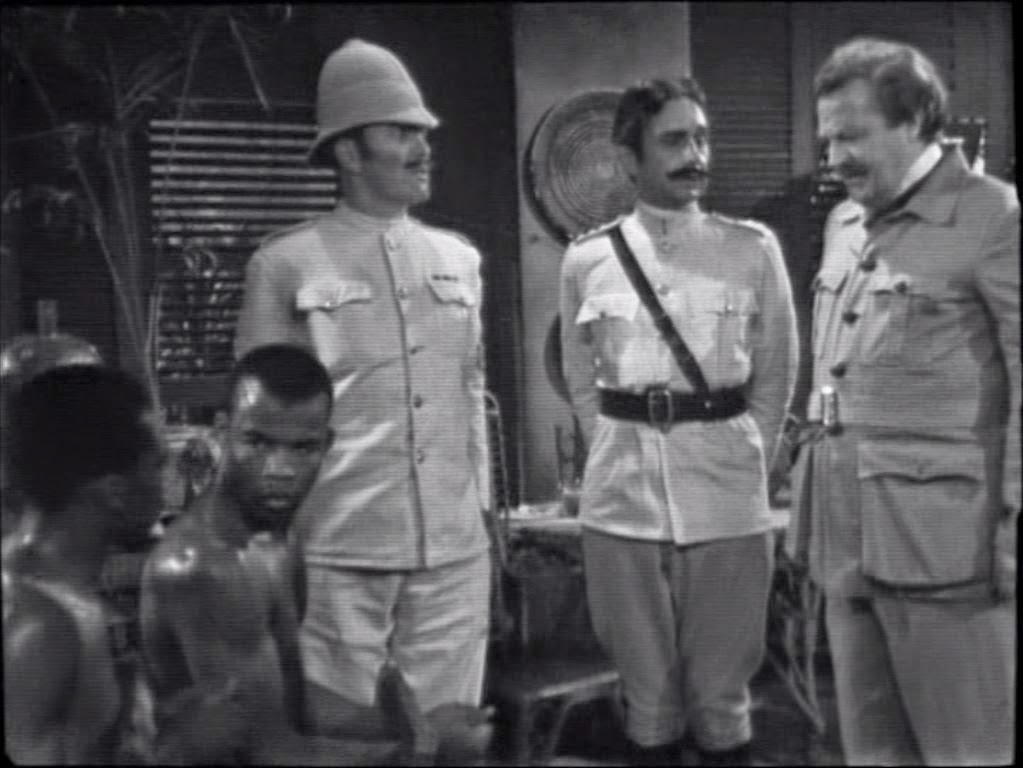 It seems the men admitted to looting Rolland's belongings, but protested their innocence of his murder.  Among their haul was a framed photograph, the subject of which Cork and Fraser immediately recognise... It turns out to be Mrs Somers, who was being blackmailed by Rolland after having an affair with him.  As, it emerges, was Mrs Brinton.  Cork finally unmasks Brinton as the killer, and the colonist is then shot dead by Angellee (whose native blood demands vengeance for the murder of her lover). 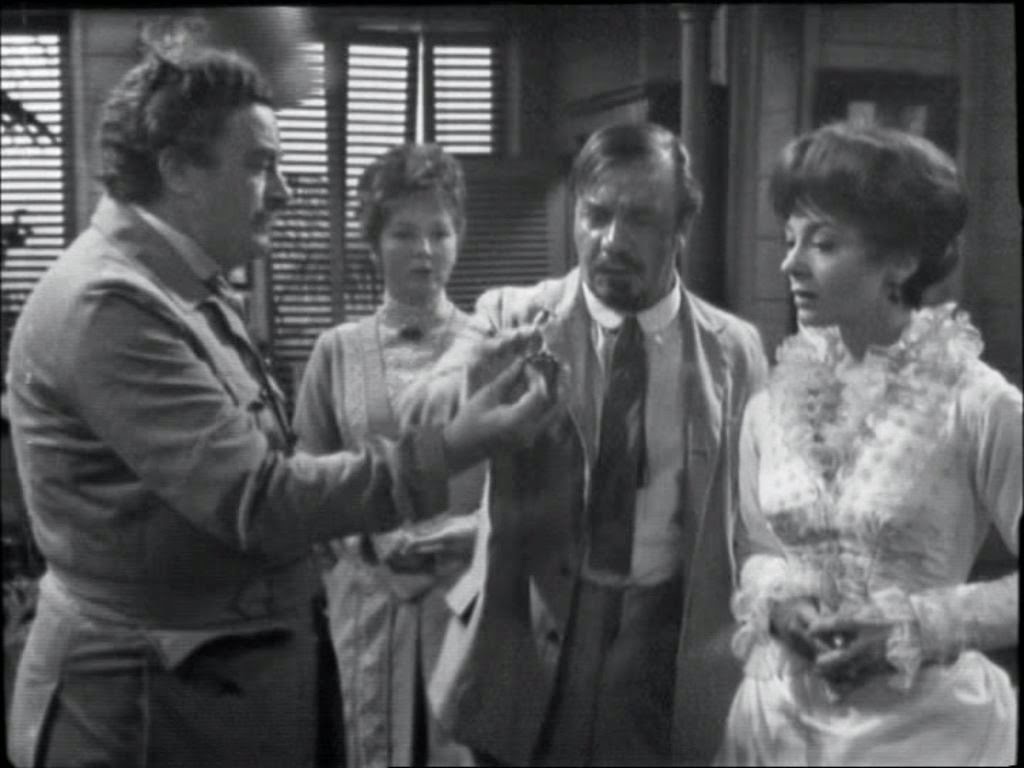 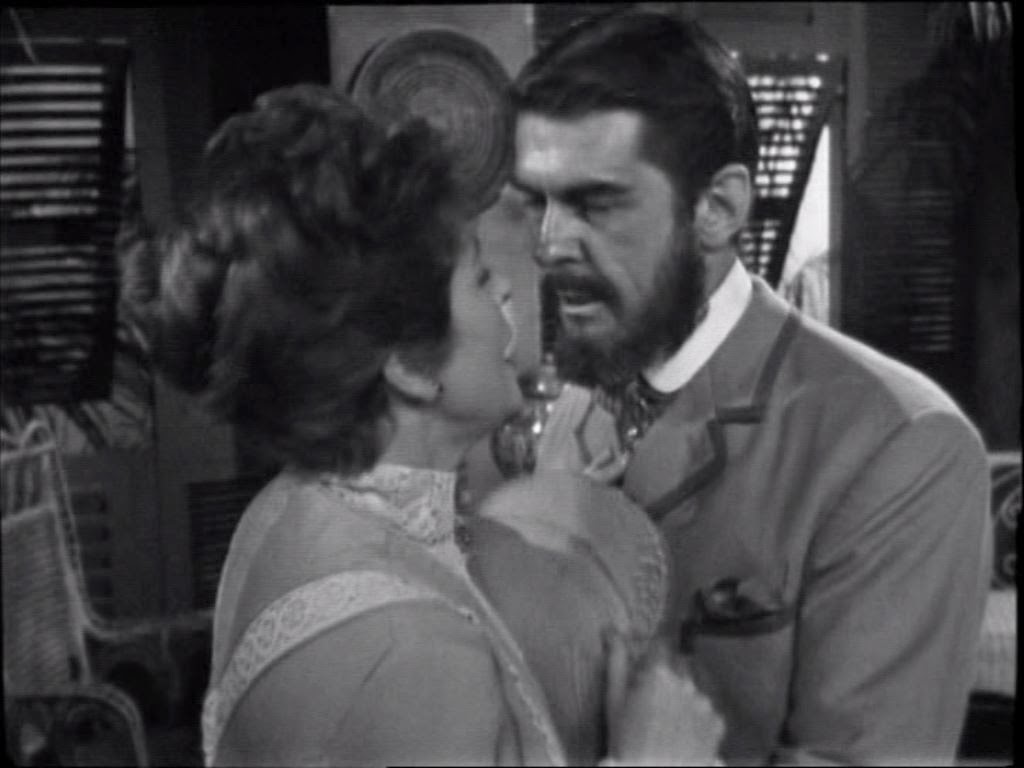 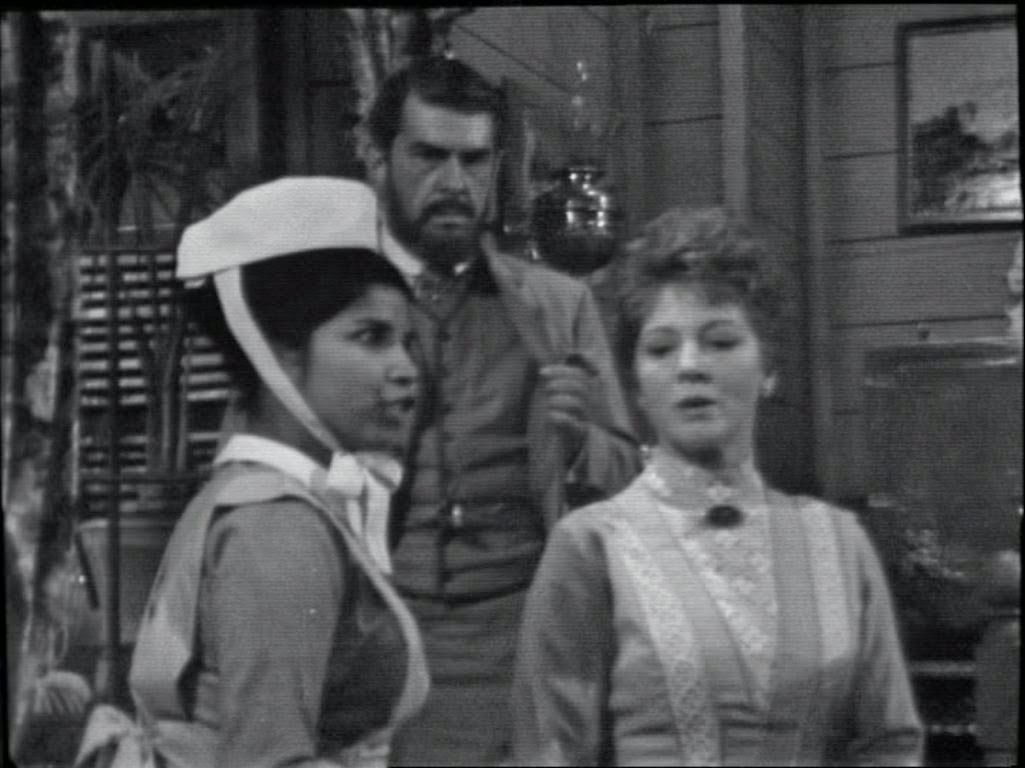 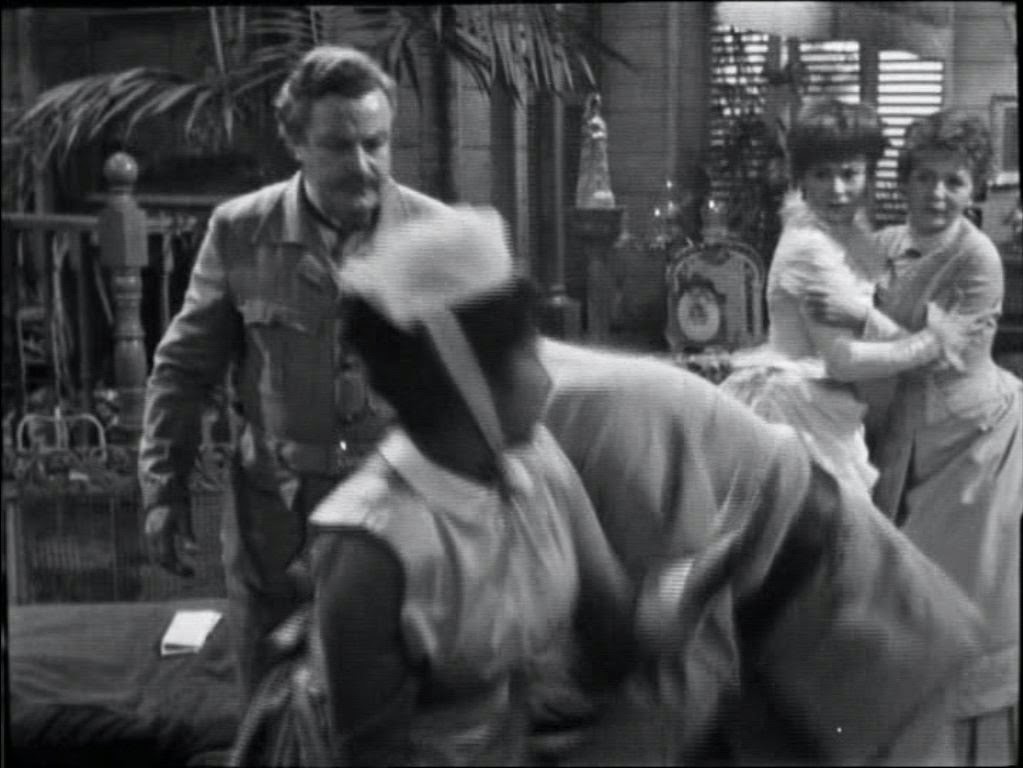 The Case of the African Murder is fascinating for what it reveals of the attitudes of the time it was made, and also as a reminder that, however well-intentioned a TV show or film might be, it's likely to be viewed rather differently in another 50 years.
Posted by Ivan at 18:07